This is my submission for the One Script gamejam!  It was made using only a single script file in 7 days (~40 hours), and you can watch the process in this timelapse.  I've also made the source code available, if you want to tinker around in it =D

In Planetary Evacuation Force, you are tasked with warping from planet to planet and evacuating all the people while defending them from the falling Missiles and Enemy Robots.

The theme of the jam was "Leave Something Behind" and in this game's case, it was incorporated in the decision of abandoning the people on the planets:

Do you risk staying on the planet just a little bit longer to save those last few people stuck in the cities, or do you play it safe and evacuate, leaving them behind, but ensuring those already rescued are safe and sound?

This was the Design Sketch that I drew that morning, and all of the elements I planned here ended up in the game, for the most part.  (The only two things I can see missing from the sketch are the Base orbiting mechanic, which I added but later removed because it was confusing and didn't add much to the game,  and the turret on the Ground Defence Mech, which I just didn't have time to implement. ) 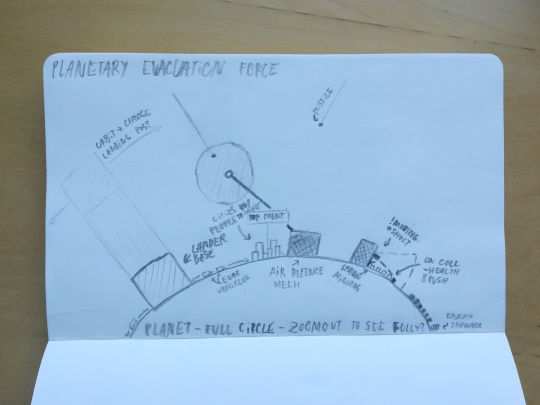 The whole ground defence area of the game was a bit rushed and didn't end up as good as it could've been.  After the jam is over, I may come back and re-balance it and other things like the spawnrate of missiles, but I wouldn't hold my breath for it ever actually happening :)

Overall, I'm really pleased with how this game turned out.  The first two days I had a lot of uncertainty whether I would have anything to show at all, but after the Missiles and Air Def Mech were added, it started to look more like a game and I was a lot less anxious :D

v1.01 is the same mechanically as the one originally submitted to the jam, with added planet images from Nasa.

v1.1 includes a balance patch (missile spawn rate, price of mechs, mech movement speed, population lost from missile strikes, etc.) and some other improvements suggested by everyone who played the game (like the money carrying over between planets as well as adding a main spaceship on the menu representing saved people more visually)

Very fast moving gameplay and i say that as it seems like it take forever to rotate the planet sometimes like it takes too long to do the actions i want to do, it feels very polished and the endless nature of the game makes it feel somewhat lacking, the game's controls being varied gave me some confusing with the ground defence being activated with space and the air defense being left click.

i can somewhat see the theme in this game although not too sure of its presentation as i think you're intention was the leaving behind was the leaving the planet behind although i could be wrong.

The game however in the end of the day is very well polished with a very simple tutorial, however i would wish for a more interactive one or a simple overview of the controlls as there is a bit too many slides. Greatwork tho as the game seems very well designed and there is a few systems i can see that are working under the hood.

Thanks for the feedback, and for playing :)

The slow mech movement was intentional (tough, now that I think about it, I could speed it up a tad), I sort of didn't want the player to be able to defend the whole planet with a single mech, thus forcing them to buy multiple and have them spread around.  I don't think the game did a great job at explaining that, so I apologize.

That's a good shout, with the action buttons for the mechs being different! I'll probably change them both to left click for consistency.

And, yeah, an interactive tutorial would've been the dream, but I didn't want to spend too much dev time on it. I may rework the current one to have fewer images, as you suggested...

Also, them theme was more specifically about leaving behind the people from the planets you evacuate. So the idea would be that you had to weigh the pros and cons of staying a bit longer to save those last few people, or evacuating to protect those already saved. (Again, not crystal clear, I'll add a line to the description explaining it better :)) 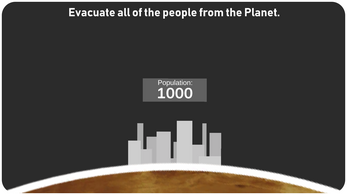 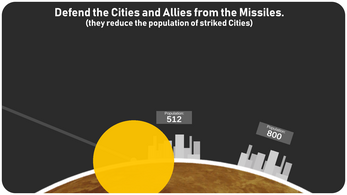 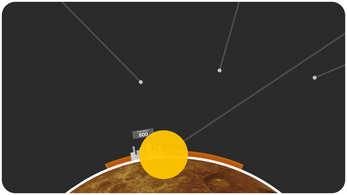