Turn Based Tank Game is a hard game to describe (hence the bad title), so I decided to  post some gifs to give you an idea of what the game is like. :3   (also, sorry for the abysmal resolution, Itch.io limits the images to a mere 3MB)

The game is rather short, as I found it pretty difficult to design levels for it, so I decided to include a level editor that works cross-platform (levels made on PC can be played and edited on Android and vice versa) so you can make and share your own levels.

Also, I decided to release the .capx file so if any Construct 2 users want to go through it and see how I did certain things.

A bit of history:

I got the idea for the game 7 months ago. One morning, after desperately trying to find a new idea for a game the previous night, this idea of a tank moving along on these blocks and having to aim it's barrel to shoot at other tanks sort of got into my mind, just out of nowhere. I still got the original drawing: 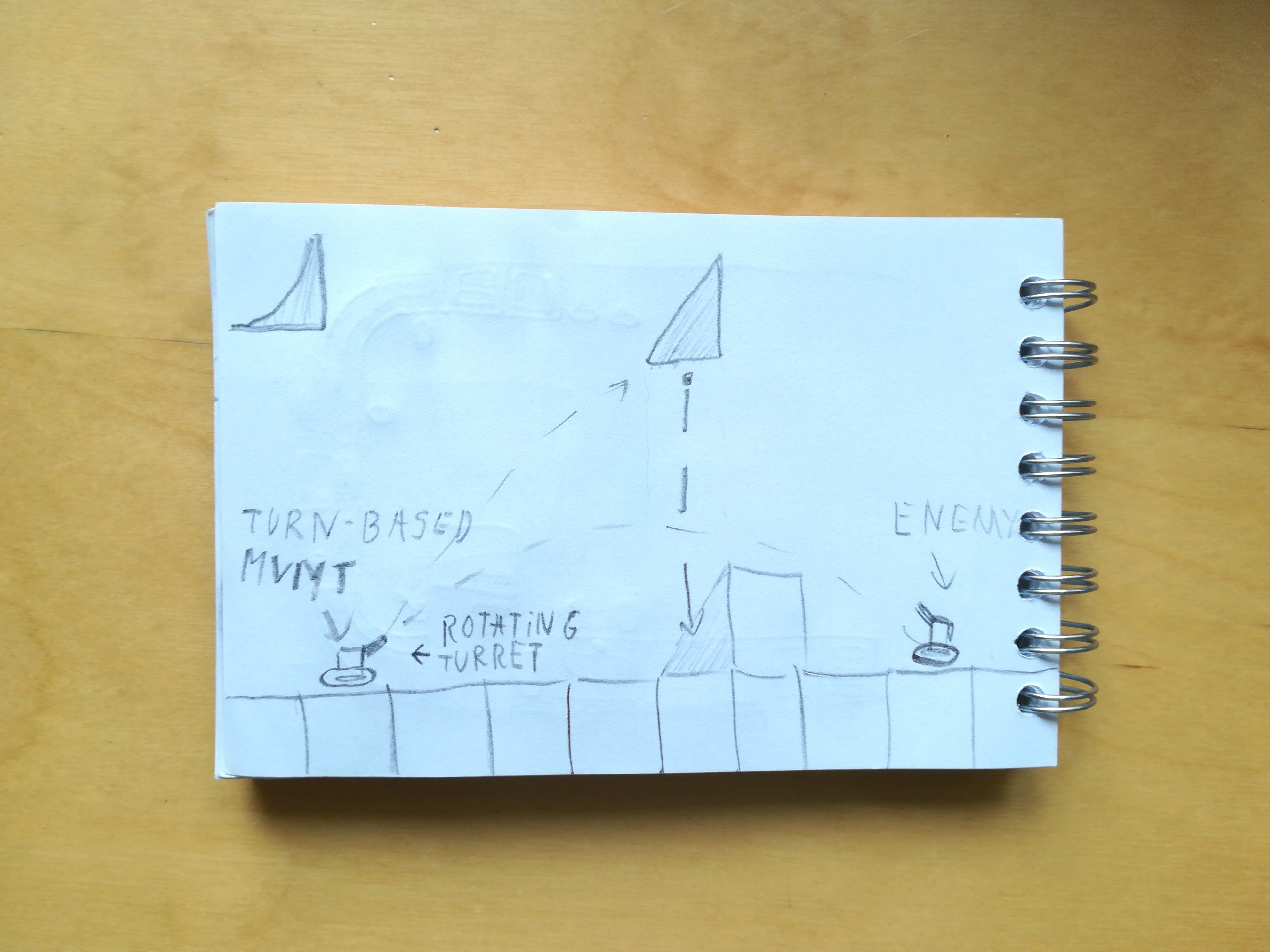 (Even though in the image there are no walls or ceilings, I did have the idea for them from the start.)

Afterwards, I worked almost solely on making the movement for the player and since it was a non-conventional movement system, this proved to be big problem... A 4 month problem to be precise, but the length wasn't the biggest issue - the fact that I could not tell whether the game was going to be fun to play or not (something that even now I don't know, since I've been working on it for far too long).

If I were to make this game again, this would be the main thing I would change.

Thankfully, after those 4 months I managed to make this basic mechanic work and I was finally able to move on to my other, less concrete points, like the story for example. (I had the idea of telling a story about A.I. oppression where you were this A.I. battle tank that was left deserted after a war and now got rebooted and discovered that one human faction defeated everyone and was now enslaving the A.I. it used during the war. All very ambitious, to put it lightly, considering that I 1) know nothing about telling a story, and 2) I wanted to tell most of it without using any words, just trough the mechanics and the backdrops...)

Unfortunately I could not work on the game for about a month after this and when I started working on it again, I didn't know where to take the game from there. It was clear to me that I could not tell that story (at least not in a competent enough way), so I tried improving the game play by adding different weapons like a laser that would only fire straight or a bullet that would cling on an enemy and that the player could remotely detonate to kill multiple enemies at once but it felt like those weapons detracted from the game more than what they added... (these weapons are still in the game if the "Debug" button in the menu is toggled on. They're mapped to buttons 1-5)

I sort of lost interest in finishing this game at that point, but I also could not get myself to cancel it since I did think that it was at least an interesting idea, even if it might not be that fun to play, and that I could at least point to a game I made that isn't a 2yr old sh!tty mobile game, so I decided to make the version I had playable and release it online.

As I said above, the levels proved to be a bit of a challenge to me (most of the levels I designed were very boring, like the ones in the last two gifs) so I decided I would rather spend a week (which turned into a month :P) working on a 99% complete level editor. (the only things missing from it are locking the camera on one axis/one point, the camera zoom and resizing certain blocks to create bridges like the falling one in level 3. I mostly excluded them since they would be UI nightmares)

Two months later, after fixing miscellaneous bits of the game & finding bug after bug, I finally finished it and released it right now.

Thank you very much for reading this! Hope you like the game!

-Undo button does not bring back dead enemies, destroyed blocks or falling blocks. I would've fixed this bug, but I noticed it very late in development and I wanted to finally publish this game.

-If the player mashes the undo button while moving left/right and an enemy collides with a "turn point", it will sometimes turn the wrong direction. I have no idea why this happens and have wasted many hours just debugging this, but it happens so rarely and is so specific that I was ok with leaving it in.

- If it says: "Install Blocked", go into Settings - Security and turn on Unknown Sources. (After the game is installed, it can be turned back off)

- If you are able to run the .apk file, but the game does not install, exit out of it and run the other .apk file that came in the .zip file.

After the game is installed, the .apk files can be removed and Unknown Sources can be turned back off.

•Mac & Linux: the game executable is called NW. From what I understand You can change it's name, but since I don't have a mac or linux machine, I can't test it, so I left it as default.